Having a Healthy Smartphone Relationship 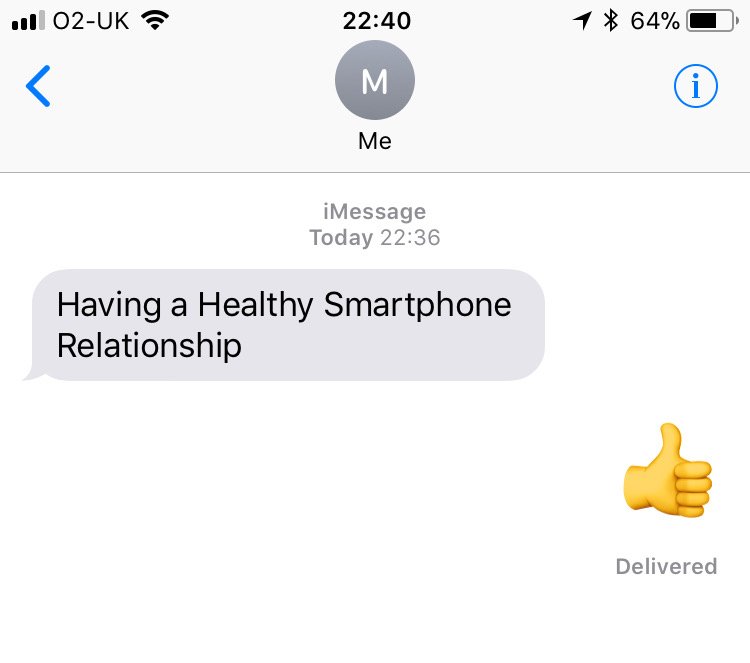 So it’s 1715 and I have to be in central London for 1900. Out comes the smart phone, open up TFL and I work out that it’ll take 55 minutes to get there on the tube. Open the Waze sat nav, 57 minutes to drive there. I’ll go for the tube then. 20 minutes later and I’m on the tube, checking my email – nothing I need to reply to for the moment. All is going well until the announcement comes over the tannoy, ‘We’re going to be held here because of a customer incident at Bond Street’. Out comes the phone, quick look at the map and the alternative route is found so I’ll still be there on time…

It’s just before 1900 and I sit down in Conway Hall for the latest Action for Happiness talk. Tonight, it’s all about having a happy and healthy relationship with your smartphone, led by Laura Willis, the co-founder of Shine Offline – a company that aims to empower and support people to ensure their smartphones enrich their lives, not rule it.

I’ll have to say that whilst I do use my phone quite a bit (it controls my heating amongst other things), I don’t consider myself to be obsessed by it. However, when Laura did ask us all to switch off our phones I did have a moment of concern – what if someone needed to get in touch with me? But I decided best to have it fully switched off.

Laura explained that her own relationship with her smartphone hadn’t been healthy – she felt permanently connected to her email. Then, after becoming a mum, she struggled to decipher where work stopped and home started and realised she needed to do something about it. She needed to be aware of what was happening around her, being present. Laura turned to meditation to help her out and noticed the impact it had on her wellbeing.

Then after noticing other people around her drowning in a sea of emails and social media updates, looking at their phones unaware of what was happening around them, she had a lightbulb moment and came up with the idea of Shine Offline.

Laura went on to explain some of the staggering facts about how we interact with our devices. An average iPhone is unlocked 80 times a day, but more worryingly we touch the phone 2,617 times. 9 out of 10 people have phantom vibrations, when you think your phone is vibrating but it’s not (I definitely have that one). 55% of people look at the phone within 15 minutes of waking up (yes that’s another one I do). We’re now spending most of our free time looking at screens and it’s all down to the smartphone.

Whilst these devices can be useful, it’s important that we don’t let them rule our lives. With so many apps and the call of social media, we’ve literally become addicted to our devices.  It works like this. As our comments are liked, we get more followers or some other kind of  reward, dopamine is released in our brains which makes us want to return for another hit. It’s this feeling that draws us back, just like people who gamble get the rush of the win.

Laura continued to share with us that some of those involved in the early days of social media, such as one of the founders of Facebook, Sean Parker, are revealing that the sites exploit “a vulnerability in human psychology”. He went on to say that it focuses on a “social-validation feedback loop”. By getting a ‘like’ we are getting a “little dopamine hit” and this encourages us to upload more content.

But it’s not just the impact on our social interactions. The devices are also constantly grabbing our attention, suggesting we’re distracted nearly 50% of the time. Dan Nixon from the Bank of England has written a blog on the economic impact of this crisis of attention, suggesting the decrease in productivity is directly linked to use of smartphones.

So what can we do about this? Laura did emphasise that she felt a full digital detox wasn’t the best approach, comparing it to bingeing at the weekend and going on a diet on a Monday. She felt the best approach is to have a healthy relationship with your devices and had some tips on how we could make this work.

These tips will work for some people, but not for others, so it’s best to play around and experiment to find out what works for you.

Following the talk, I’ve already changed my notifications, so I now don’t reach for the phone every time there is an app alert. I’m planning on using my clock radio to wake me in the morning and the other day I left my phone at home when I went to visit a friend and didn’t panic at the thought that people would be trying to contact me and couldn’t get through. Why not try some of these tips out for yourself and see if you can improve your smartphone relationship.