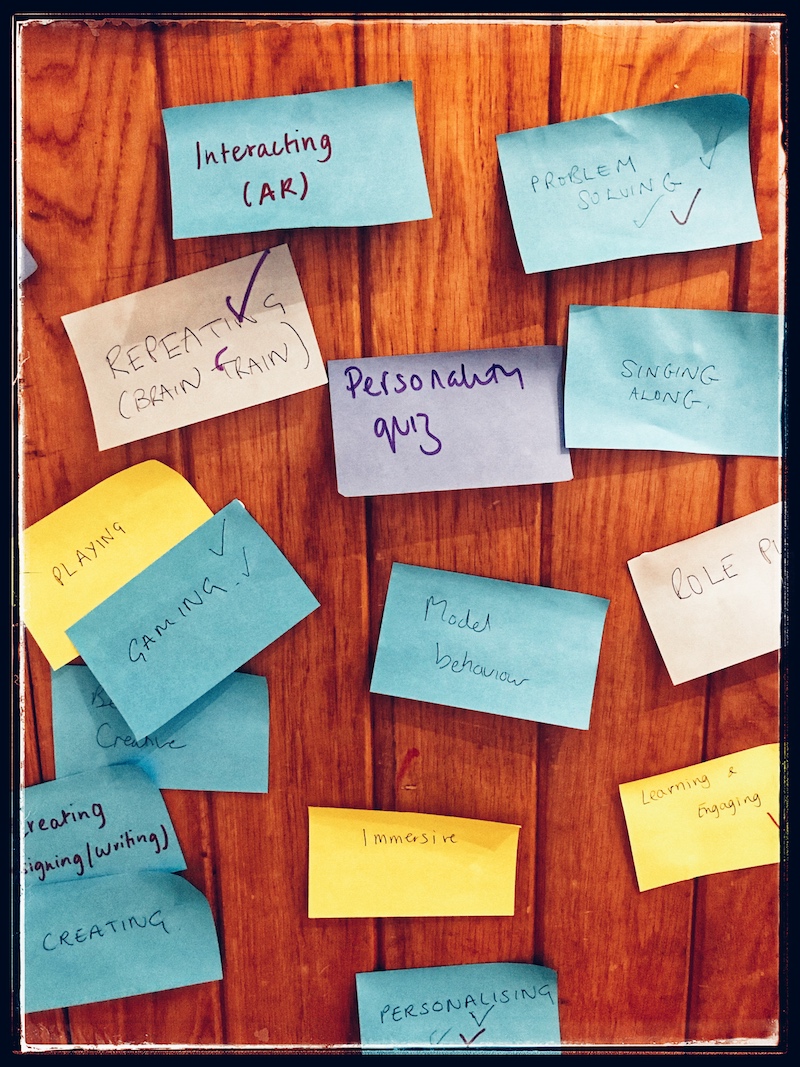 Last Monday was a big day here at the Happynesshub. As our telly and happiness worlds draw closer together, we embarked on an ‘away-day’ to really knuckle down and refine some new ideas.

The day was filled with productivity and some surprisingly solid achievements that will act as a great foundation for us to work from. Not only this, but the atmosphere of the day was one of real teamwork and happiness. There was laughter and joy throughout, despite the fact that we were actually all working very hard.

This got me thinking… what was it exactly that created such a positive and happy work environment?

And the answer I came across was this: Creativity.

The day was scheduled so that we could maximise our creativity and achieve what we needed to within the timeframe we had. Sessions, techniques and outcomes were planned meaning we were entirely focussed. There were icebreakers, visual aids and clear instructions to keep the creative flow, and the day was largely technology-free. We used paper, pens, post-its and flipcharts to get down our ideas – this meant that we were not distracted by computers, emails or phone calls and were free to focus the entirety of our attention on the creative task at hand.

As well as this, we even had a set of rules to maximise the creative environment and ensure all thoughts were vocalised as much as possible. For example, everybody was encouraged to ‘Think Big’, nobody’s ideas were to be shut down by interruption or negativity, and most importantly, we would be working together.

Studies have connected creativity to a boost in happiness, which perhaps helps explain the positivity of the day. One study, through examining diary logs of 658 participants over 13 days, has found that spending time on creative goals correlates with a higher positive affect and flourishing that day. In other words, being creative can improve your wellbeing.

Indeed, Dr. Carrie Barron, Director of the Creativity for Resilience Program at Dell Medical School in Austin, Texas and co-author of The Creativity Cure, says that practising creativity can actually help to relieve feelings of depression. What’s more, creativity can lower stress levels, improve your mood generally, and help you to become more present and focussed.

That’s great… just be creative everyday and you can be happier. And, indeed, I could say to you Hubbers that I fully intend to harken back to my art A-Level days and pick up a sketch pad at least three times per week – and that you should all do the same.

But of course, in reality, it’s not that simple. What about the people who don’t consider themselves creative? Not everyone’s job has the capacity to allow for outwardly expressed creativity. We don’t all have the time, or indeed desire, to sit down with a blank sheet of paper to fill with…well, something.

Creativity is defined in the dictionary as ‘the ability to use skill and imagination to produce something new or to produce art; the act of doing this’. But this, I think, limits what creativity can be. Others have defined it differently – the diary-log study that I referred to defined creativity as coming up with new ideas, expressing oneself in an original way or spending time engaged in artistic pursuits. And this actually hugely broadens out what we might do to ‘be creative’.

The type of creativity that contributes to wellbeing doesn’t have to be about drawing a picture, or writing a poem (or even thinking of new TV shows!)– it can be applied to so many things. Creativity can be solving a problem; cooking a meal; writing in a journal; doing some gardening; or even putting together a really good spread sheet. It is, perhaps, simply doing something in a way that is different from how you might have done it before.

And remember it’s not the final product that is important, it’s about going through the process. It doesn’t matter if you are tone deaf but love to sing, if your flower beds aren’t going to shortlist in the Chelsea Flower Show, or if your cake looks like it’s been trampled on by a herd of buffalos…just have fun and enjoy the creative process.

So Hubbers, get those creative juices flowing. Why not do something different or differently to allow your brain to think creatively? You never know, you may just feel happier for it.