“I would maintain that thanks are the highest form of thought; and that gratitude is happiness doubled by wonder.”

CHOOSE THREE PEOPLE WHO YOU ARE GRATEFUL TO HAVE IN YOUR LIFE. AND WRITE A LETTER OF GRATITUDE TO EACH OF THEM.

So close your eyes, breathe in and out deeply three times, and start thinking of that person and how you’d like to thank them. Then get writing! To strengthen the effect go post the letters; or even better still contact those three individuals, visit them even, and read them your letters out loud!

Welcome to our Day 13 Happynesshub Hint Film with our very own Sally here to explain more about today’s exercise and fill you in on the nuts and bolts of how to get the most out of the day.

Welcome to our Day 13 Movement and Meditation Video, which features gentle breathing, stretching and meditation. If you have any health concerns, please consult your GP first. If you have a yoga mat that is helpful, otherwise please do not practise on a slippery surface.

If you would prefer to follow a shorter breathing and / or meditation film (with no stretching) please click here. Or if you want an audio meditation only, choose how long you have, then click and go! 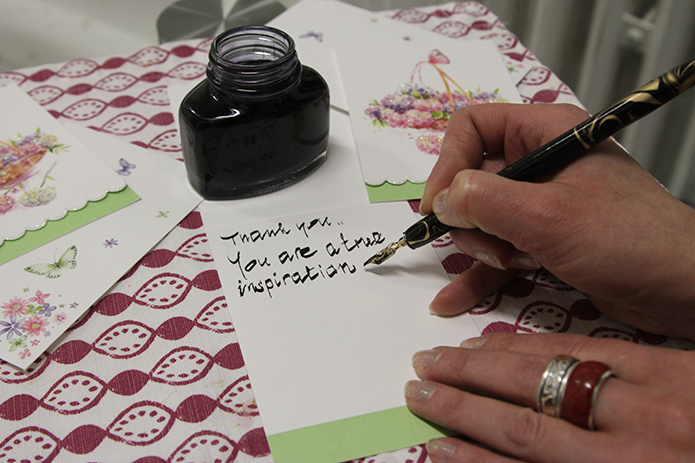 It’s Day 13 and back to gratitude. It’s too much of a biggy not to!

Only last year I was lucky enough to go on one of Robert Holden’s Happiness Courses (Robert is the Founder of the Happiness Project: http://www.robertholden.org/the-happiness-project/) and I found myself being asked to write three letters to people in my life that I wanted to express gratitude towards. This for me appeared an easy task, since I was already writing my gratitude diary and people I loved popped up on a nightly basis. But actually this exercise was very different. There were some, like my Mum, who I found it easy to tell them how much I loved them, how much they had given me, and how grateful I was for their presence in my life. But others (often males, like my Dad and my brother!) I realised as much as I felt these things, for some reason I found it hard to communicate them. So I set about writing the letters, and as I did so I felt truly happy.

Evidence shows that once you have written the letter, if you then ideally read it to the person, or at least send it, this will increase happiness levels further! On my course we had to post the letters, but interestingly enough when they were received fortuitously they led to a conversation, and in the case of my Dad, enabled me to truly express how grateful I was.

There’s an interesting experiment from 2013 where a group of people were asked to write a gratitude letter. For those that did, happiness increased between 2% and 4%. Not so staggering. However, for those that then picked up the phone, read their letters and expressed their gratitude the happiness increases were between 4% and 19%. Even more interestingly, the person whose happiness increased the most in this experiment was the one who was the unhappiest at the start. (To see the film of this experiment visit this YouTube link). In summary, if you’re feeling bad, go express your gratitude, because it’s very likely you’ll feel a whole lot better. Get scrawling!